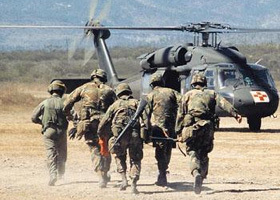 “I think they’re doing the right thing for the wrong reasons and in the wrong way,” was Selig Harrison’s comment on the announced redeployment of US troops from the demilitarized zone in South Korea.

In a New York Times 6/7 interview, Harrison, currently director of the Asia Program at Washington’s Center for International Policy, said he believes the decision is “long overdue” because the threat of another North Korean attack on the South “is remote.” Reasons Harrison, “North Korea is in such bad shape economically that it could not sustain a protracted war. North Korean forces are forward-deployed at the DMZ to deter us, to make an American pre-emptive strike unacceptably costly, not to attack the South again.”

In Washington circles, there is some debate about who actually made this decision and why. Some believe that the Defense Department, under Secretary Donald Rumsfeld, pressed ahead with this move, without really coordinating it within the Bush Administration, and worked over the Roh government to accept the plans without any effort to negotiate conventional force reductions with North Korea. At the same time, Undersecretary of State John Bolton seems intent on getting cooperation from China, South Korea and Japan on his plan to cut North Korea’s ability to ship drugs, counterfeit money, and missiles to other countries.

But getting cooperation from these countries on an interdiction of ships on the high seas seems questionable, at best. China, while wary of North Korea’s nuclear development, is not interested in provoking the Kim Jong-il regime. At their June 7th summit, Prime Minster Junichiro Koizumi and President Roh Moo-hyun affirmed “we do not allow North Korea to possess nuclear weapons nor nuclear development program and have to solve this issue in a peaceful and diplomatic manner.” Tough measures, a la the “Bolton Plan,” do not seem to have much resonance in the region.
The Bolton/Pentagon hard-line approach seems to many to be aimed at “regime change” in North Korea, not any attempt, as the State Department would like, to engage in negotiations to end North Korea’s nuclear buildup and leave it at that for now.

Deputy Defense Secretary Paul Wolfowitz tried to sell the Korean redeployment as part of a worldwide shift in American military posture to respond to the number one U.S. priority, the war on terror. In this view, there is a need for smaller, more mobile units of Americans, armed with high-tech weaponry, spread across the globe and not the Cold War garrisons in places like Germany, South Korea and Japan.
While in Asia, Wolfowitz noted that the U.S. “can achieve an effective military force at much greater distance than we could before, and often with a much smaller number of forces. That’s I think the spirit in which we are looking at our deployments in Europe, in Northeast Asia … and in the Persian Gulf as well.”

Joel Wit, senior fellow at the Center for International and Strategic Studies, is not buying this argument in the Korean context. “Militarily it may make sense. Politically, it’s dicey. You don’t want to be tinkering with your military posture in the middle of a crisis over the North’s nuclear-weapons program.” He added that South Koreans fear that the US has “a hidden agenda to pull out. That is their worst nightmare.”

Harrison believes that the North Koreans are “ready to dismantle their nuclear program under adequate inspections if we are prepared to pay what they consider an acceptable price. First, we’d have to join in a bilateral or multilateral agreement pledging not to use our nuclear weapons against North Korea, an agreement that would have to be linked to a de-nuclearization process. Second, we’d have to pledge not to pursue the policy of regime change that President Bush has made clear is his preferred approach to North Korea. Third, we’d have to be prepared for large-scale energy and food aid. If we pursue pressure tactics that they would view as designed to overthrow the present regime, they are certain to respond either militarily or through other retaliation such as selling nuclear material to anti-American third parties.”

Whether President Bush has already acceded to the Rumsfeld/Bolton confrontational approach or is still willing to listen to advice like Harrison’s, which echoes much of the “Powell line” in the State Department, is not at all clear. Furious inter-agency infighting continues at this time as does communication from other nations in the region. With Mr. Bush having already kicked off his 2004 presidential campaign, with the “war on terror” and Bush as the commander-in-chief sure to be his political director Karl Rove’s key themes, the betting in Washington is not heavily in favor of Mr. Powell and his approach.